Last week we had to say goodbye to our beloved friend and companion Hobie. We were so lucky to have many long years with such a great dog and to be able to share so many adventures with him. His loss has left a huge hole in our hearts and our lives and we miss him like crazy. Here is his story.

Hobie came into Emily’s life in southern Oregon when he was only seven weeks old. He was a Catahoula Leopard Dog mix and since Emily had been doing some sailing on a Hobie catamaran that summer, she joked that they should name the new puppy Hobie Cat. The name stuck. He was a chubby, adorable puppy who was so awkward that he tripped over his own feet. He quickly grew into a sleek, athletic dog that ran like the wind. 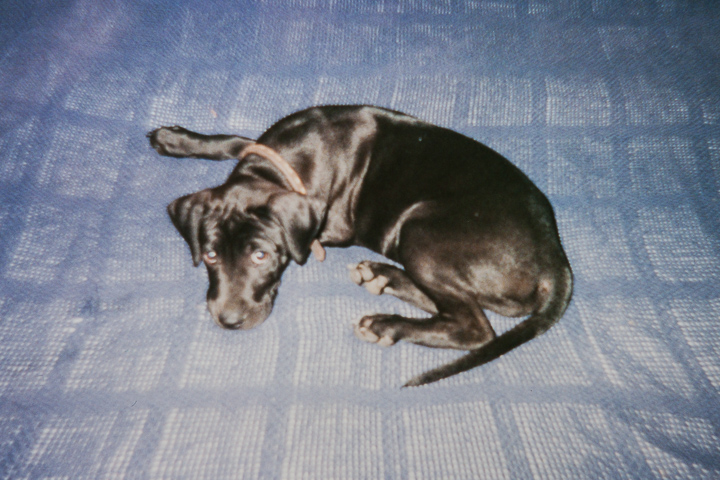 Handsome from day one.

When Hobie was only a few months old, Emily and her boyfriend adopted another dog, a stray pitbull that they named Django. Hobie and Django quickly became inseparable playmates and cuddle buddies. They wrestled, chased each other around the yard, and played tug-of-war until they were exhausted, then curled up together. They continued to be best buds for the past thirteen and a half years, growing into grumpy old guys together, but still frequently cuddling up on one bed.

Hobie was a very energetic dog, who needed a great deal of enrichment and exercise. He absolutely loved to hike, especially when he was allowed off leash. He knew that when we put on his “official” collar, the one with the tags on it, that it meant he was going for an adventure and he’d get so excited that he could barely wait to get out the door. He was never a heeler, always preferring to lead the pack, and he never wanted to turn around. Even when his joints ached in his elderly years, Hobie always wanted to keep going further on every outing.

Aguas Calientes, at the base of Machu Picchu, 2014

On the flank of Volcán Lanín, Patagonia, Argentina, 2015

Not only did he have the looks, Hobie also had the brains. It never took him long to learn a new trick or figure out where we hid the food. This also meant that if he didn’t get frequent stimulation then he would get into trouble. He was mischievous his whole life, as a puppy he destroyed many shoes and books, he even tore up Emily’s passport when she left it sitting on the table. To keep him occupied we often came up with challenges for him, which usually involved hiding a treat inside layers of toys all tied and twisted up. It never took him long to tear up everything to retrieve the goodies inside. One of Hobie’s many endearing traits was how his eyes would bug out when he was excited about something tasty, like watermelon. We affectionately called this “Hobie eyeballs”. We only discovered in his later years that he loved to eat watermelon, and somehow he knew how to eat it like a human – nibbling little bits off the rind.

With a strong spirit for adventure, Hobie loved to travel. In his younger years he took many road trips and went camping countless times with Emily in Oregon, California, Colorado, and many places in between. Hobie and Django both accompanied us on our first road trip in the van, through the Canadian Rockies in 2012. Hobie loved it, even though most of the time we were driving Django sat directly on top of Hobie because he was so terrified.

Django using Hobie as a cushion on the road in 2012

On the beach in Tofino, Vancouver Island

When planning for our PanAmerican adventure we wanted to take Hobie with us, but we were nervous about the additional difficulties he would add to the trip. It turns out that he was very little trouble at all, and the pleasure we got from his company and the laugher he gave us more than made up for any hardships. Hobie quickly and easily adapted to van life and loved exploring new places with us. He was such an integral part of Subagon South that we can’t imagine having all those adventures without him.

Loving life on the road

On the milk truck, Colombia

At the end of the road, Tierra del Fuego

At the end of the road, Tierra del Fuego

Some of our favorite memories from the journey were crossing the Darien Gap by sailboat with Hobie. Having not been on a boat since he was a puppy, we weren’t sure how Hobie would take to life at sea, but true to his name, he quickly found his sea legs. We spent three days sailing from Panama to Colombia, two of which were in the beautiful San Blas islands. In order to get Hobie to shore to go to the bathroom we either swam or kayaked to the nearest island. Hobie was never that fond of water, but he understood clearly when it was time to swim ashore, and then when it was time to return to the boat. As usual, he charmed and earned ear scratches from everyone on board and he was a champ through the rough waves of the open water crossing when almost everyone was seasick.

Shuttling out to the boat

Kayaking to the nearest island

Hobie was a loving and loyal friend and a big part of our family. In February we were very happy to welcome our son, Tobin, and we are so glad that Hobie and Tobin had a chance to meet. Hobie usually seemed more interested in Tobin’s dirty diapers than in him, but we did catch him sneaking the baby kisses now and then. Tobin won’t remember Hobie, but we’ll be sure to show him photos and tell him all about one of the greatest dogs, sweetest friends, and best travel companions that ever lived.

Our family a week before Tobin was born